British actor Honor Blackman, who played the most iconic Bond girl, Pussy Galore, has died at the age of 94.

Born on 22nd August 1925 into a lower middle class family, Honor Blackman grew up in Plaistow, East London. For her 15th birthday, she was offered either a bicycle or elocution lessons. She chose the latter. Blackman described her teacher as an inspiration, introducing her to poetry and the theatre and suggested she enrol in the Guildhall School of Music and Drama. Blackman’s studies coincided with World War II and she interspersed her theatrical training with a job as a despatch rider.

Blackman’s acting career began on the West End stage. She graduated to film and her first credited role was in the macabre British crime thriller, 'Daughter of Darkness' (1948). She was a product of the Rank “Charm School” the equivalent of the Hollywood studio system. Throughout the fifties she appeared in more than 15 movies opposite the likes of Richard Burton and Dick Bogarde, as well as Kenneth More in the Titanic drama, 'A Night To Remember' (1958). She also appeared in the cult classic, 'Jason and the Argonauts' (1963). 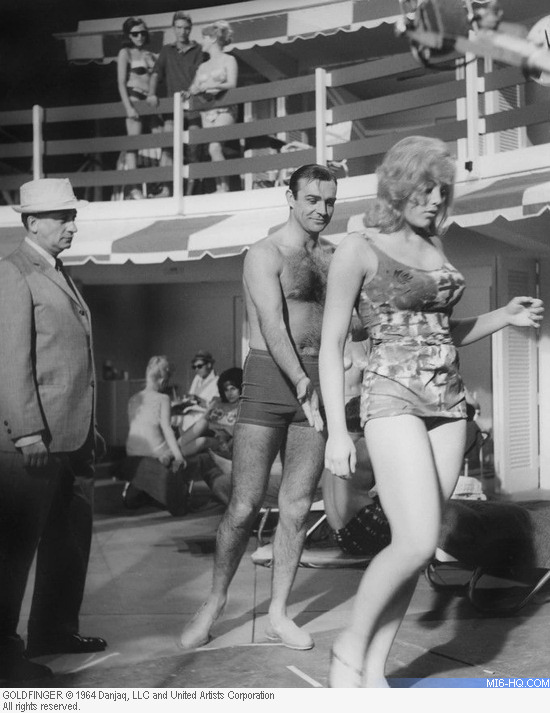 Although Blackman never made it to Hollywood, her big break came in 1961, in the form of the witty, intelligent leather-clad, Cathy Gale, in the Spy-Fi TV series, 'The Avengers' opposite future Bond series alumni, Patrick Macnee. Gale was a pioneering proto-feminist, “danger woman” and Blackman trained hard for the judo-kicking role. Reflecting on the success of 'The Avengers' she said, “Until that moment there were really only two types of women. There was the dyed blonde in black bra and stockings that the men were unfaithful to their wives with. Or there was the little wife who stayed at home and washed the dishes. Cathy Gale was the first woman who was the intellectual equal of the man and above all fought like a man.”

Blackman admitted the reason she caught the attention of Bond producers Albert R. Broccoli and Harry Saltzman was simple: by 1964 she had become “the hottest thing on television.” Broccoli remembered in his memoir, “All her crinkly leather action and shoulder throws she did so effectively in 'The Avengers' virtually clinched it for her to tussle with James Bond.” 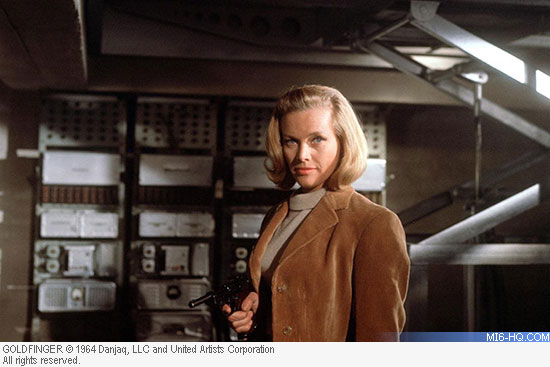 When interviewed by Ajay Chowdhury and I for our book, 'Some Kind of Hero: The Remarkable Story of the James Bond Films', Blackman admitted that Goldfinger came along at the perfect time in her career, “I’m not keen on playing the same character for years; I wanted to move on to something new. I wanted do a film that was going to be an international success and although I’d been successful, it was only in the UK.”

Ian Fleming had written Pussy Galore as a lesbian gangster with “a decisive slash of deep vermilion,” but co-screenwriter Richard Maibaum transformed the character into Goldfinger’s personal pilot and leader of her own all-female flying squad. Blackman attended a meeting first with Saltzman. “They’d decided beforehand that I would play her so it was less an audition, but more of a meeting to discuss the part. I learnt afterwards that the original script was altered before they saw me and they put judo into it.” 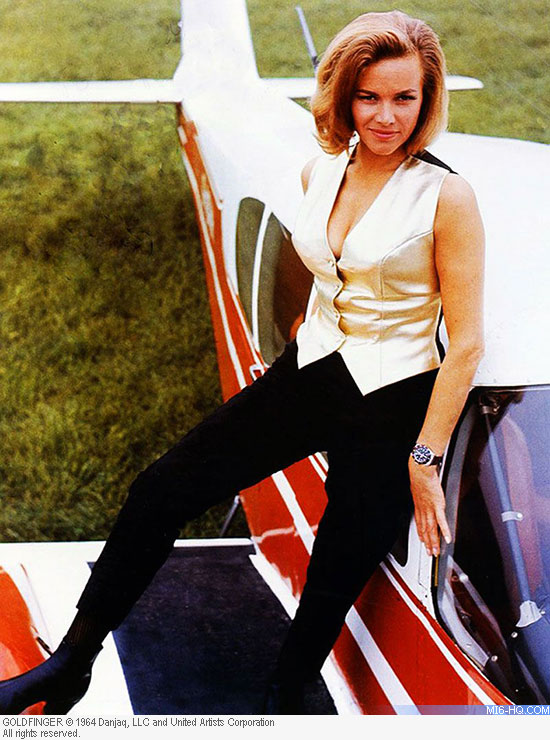 At 39, Blackman was Sean Connery’s senior by five years. She admitted Connery has a sexual presence like no other actor, “He’s the sexiest devil in the world. There’s no question there was a great attraction between the two of us. I was married at the time so I had to rein in my horses.” While remaining a great admirer, Blackman became critical of Connery in latter years for accepting a Knighthood while spending most of his time as a tax-exile and an advocate for Scottish independence.

The Bond films, especially in the 1960s, were renowned for their exotic locations. This was not quite how Blackman remembered her Goldfinger experience. She recalls, “While other cast members went to America and Switzerland, [the production] took me to Northolt Airport. I don’t think anybody can refer to that as ‘glamorous.’ Everything was on the lot at Pinewood as far as I was concerned.” 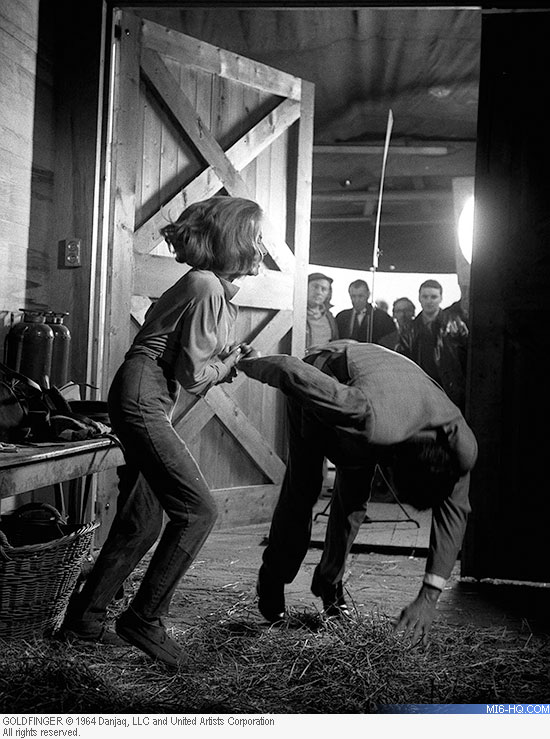 Blackman described the premiere of Goldfinger, “as the most glamorous night of my life.” She stole the limelight wearing a specially designed gold finger jewel on her hand; “It was terribly grand when one got applauded as one walked down the staircase.” Later, while on the publicity tour in America, Blackman became the centre of controversy when the US censor Geoffrey Shurlock threatened to ban Goldfinger because the name Pussy Galore was deemed too erotic. Blackman caused a stir on the chat show circuit, “When I was in the USA I discovered they were all so po-faced. They were so puritanical. I would always pipe up, ‘Oh, you mean Pussy Galore?’ Later the Americans saw a picture on the front page of an English newspaper with me talking to Prince Philip and the headline read, ‘The Prince and the Pussy.’ They were taken aback but they took that as permission that it was a decent film and decent character otherwise Prince Philip wouldn’t be talking to me.”

She disapproved of the term ‘Bond girl,’ feeling so many of the other heroines in the franchise had been nothing more than bimbos. “Pussy Galore wasn’t. She was a great character. It doesn’t matter what film she was in, she would have been a good character to play.” 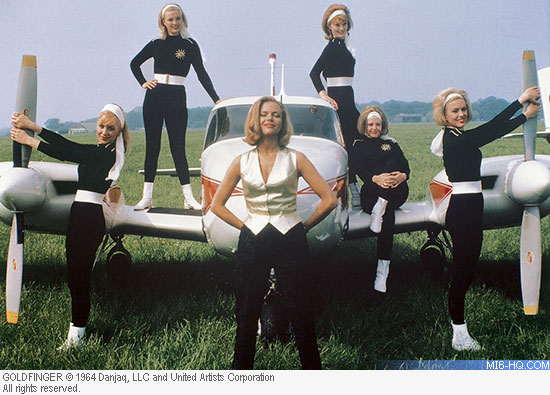 Following 'Goldfinger', notable performances included 'Life at the Top' (1965), and the mediocre British western 'Shalako' (1968) - again with Sean Connery - and Brigitte Bardot. When the British film industry hit the doldrums in the 1970s Blackman returned to the stage. Apart from a few unforgettable performances, including a topless scene in the Canadian-set drama, 'The Age of Innocence' (1977) (which also starred fellow 'Goldfinger' actor Cec Linder), and the slasher horror, 'Fright' (1971), an early example of the ‘babysitter in peril’ genre, Blackman was not seen again on the big screen for another two decades.

Blackman found a new audience in the early 1990s as the glamorous, man-eating grandmother in the ITV sitcom, The Upper Hand, which ran for six seasons between 1990 and 1996. Blackman worked tirelessly into her 80s notching up memorable appearances in shows like 'Coronation Street' and 'Doctor Who' and films such as 'Bridget Jones’s Diary' (2001). Blackman continued her theatre work and toured the UK with her one-woman show. She was an avid reader and took great interest in news and politics and remained an active member of the Liberal Democrat party. In 2014, Blackman hit the headlines after she joined a demonstration outside Parliament, campaigning on behalf of British pensioners who had fallen victim to the collapse of Equity Life.

In 2008, Blackman surprised Bond fans by introducing a screening of 'Goldfinger' at Pinewood Studios organised by Bondstars' Gareth Owen. It was the first time she had seen the movie since it was first released. In recent years Blackman had become a regular on the convention and autograph scene. She often reflected on Pussy Galore and her longstanding association with James Bond. “I can’t deny that having played that part has made a great difference to my life, my career. Also it’s a terrible bore because nobody remembers anything else one has done. I’ve done a lot of theatre, made other films that you’d never know because everybody thinks of me in Goldfinger.”