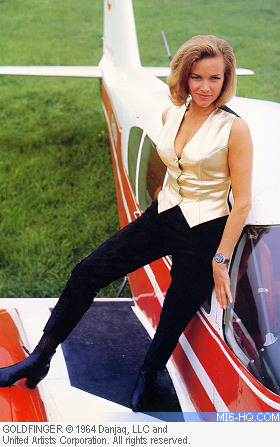 PLEASED TO MEET YOU
Bond wakes from a tranquilliser to find the bold and beautiful Pussy Galore staring him down. She introduces herself sternly and quickly, establishing the no-nonsense attitude to Bond's pithy charm. 007 soon finds there's more than meets the eye!

"We'll be landing in twenty minutes. Do you want to play it easy, or the hard way? And this isn't a tranquillizer gun."

CAUGHT IN THE ACT
Pussy Galore is a bold and beautiful lady who resists the charm of 007 up to the very last second. It takes a lot of hard work for Bond to persuade the slightly eccentric and very dangerous Pussy to see his point of view, but at the end of the mission, 007 is duly rewarded with a soft parachute landing. 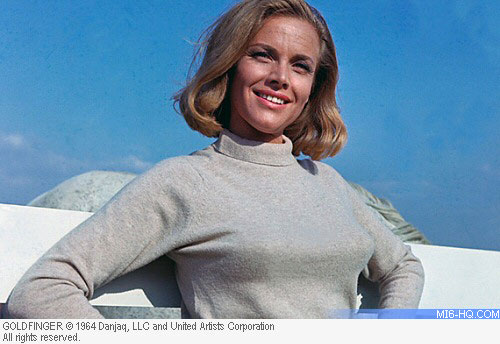 PROFILE
Hot headed and husky voiced, Pussy Galore is the personal pilot to the villainous Goldfinger. With a distinct dislike for the male persuasion it takes her a long time to warm to 007's masculine allure. She trains the top female stunt pilots from all over the world to become members of the exclusive Pussy Galore's Flying Circus. Her task is to set up her pilots to spray the Delta-9 Nerve Gas that will wipe out the military presence surrounding Fort Knox. She is eventually turned to the side of good by the ever-suave Agent 007 and rigs the gas canisters with a harmless substitute. 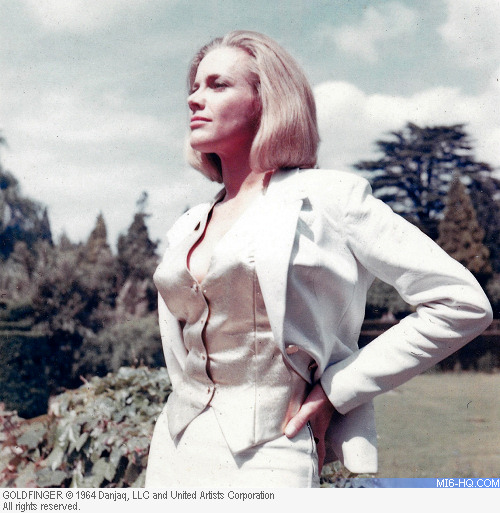 BIOGRAPHY
Born in West Ham, London, Honor Blackman is a true icon of British cinema. Her career began when she was admitted to the Guildhall School of Music and Drama. While in college she worked in a variety of part time jobs to keep the fees and bills paid. In the mid 1940s, Blackman won her first roles in English theatre including the West End with parts in "The Guinea Pig" and "The Glam". Very shortly thereafter, she expanded into the world of cinema starring alongside Michael Redgrave in "Fame Is the Spur". Other early credits included, "Quartet", "Suspended Alibi", and a regular role on TV's "The Vise".

She was soon snapped up for "The Avengers" opposite legend of the British screen, Patrick Macnee. Blackman starred in over forty episodes of the seven season series TV thriller as the sultry Catherine Gale. With her role in "The Avengers" under her diverse acting belt, Blackman confirmed her name in British TV and cinema. In 1964, the American and worldwide audiences were wowed by her sexy and forthright character Pussy Galore. Thanks to the Bond franchise, Honor Blackman confirmed herself a true icon of the screen and a name synonymous with the likes of Greta Gabo.

Blackman has worked on and off in theatre and the music industry, including a recent role in the musical "Cabaret" at London's West End as well as the 1990 #5 hit "Kinky Boots", first recorded for "The Avengers" episode of the same name.

Honor Blackman has been married twice, first to Bill Sankey from 1946 to 1954. Seven years later Blackman remarried, this time to Maurice Kaufmann in 1961. Together they raised two children until their separation in 1975.