Naomie Harris was a special guest at the inaugural GQ Heroes summit yesterday and was interviewed on stage about her Oscar-winning film 'Moonlight' as well as her path to joining the James Bond franchise and a little bit about the 25th adventure.

On auditioning for a role in the Bond series:
They said that I was auditioning for the role of a Bond girl, and I was like, 'I'm too old for a Bond girl.' I had to audition with the scene from Casino Royale on the train between Bond and Vesper. I was thinking that I know that when they do Bond casting they look all across the world... thousands of actresses. So, I thought I was one of many [and] this isn't going to go anywhere. I had no expectations whatsoever until the third audition when they said 'we'd like you to play this role and it's not actually for a Bond girl, you're going to play Moneypenny.' And then I was thrilled because that makes so much more sense! Also, she doesn't die, so that's fantastic. 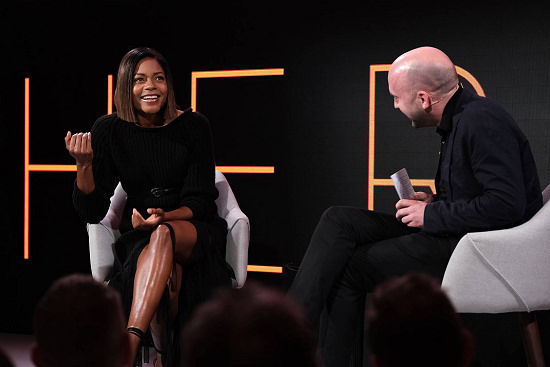 They told me it was so top secret that I couldn't even tell my team. So it was only mid-negotiation that they said, no, her role is recurring because she's Moneypenny. And my team were like 'what?! you never told us.' I kept the secret right to the end.

On whether she would have accepted a more traditional Bond girl role:
I wouldn't have liked it as much. I felt it wouldn't have represented me as well and the kind of things I like to do with my career. But I certainly wouldn't have said no.

On bringing a slightly different Moneypenny to the screen:
The wonderful thing was we had Sam Mendes at the helm and he is so collaborative and supportive and he comes from a theatre background as well. So he just said to me, 'Naomie, what do you want to do? If there's anything you don't like in the script you can always come to me and we'll change it.' He was true to his word.

On whether Bond's character should change in a post #MeToo world:
I think it always has to be its own thing because you have to represent the Bond that Ian Fleming wrote and it was of a very particular time. This is going to be the 25th Bond, this is the longest-running franchise of all time and that's for a very particular reason. The reason is it manages to keep the essence of what Ian Fleming wrote but is also constantly adapting and changing with the times to keep people interested. That's the incredibly difficult line you have to walk between keeping the die-hard Bond fans who want the traditional Bond and also being progressive with the times. I think Barbara Broccoli and Michael G. Wilson do a phenomenal job at that.

On what she can say about Bond 25:
I literally don't have any details. I have nothing for you.

On whether this Bond film is on the same level as the Avengers in terms of script secrecy (when actors only received the parts of the script that involved their character):
I think this one is going to be exactly like that. The previous ones were not. It's ramping up. I can say that!

On Phoebe Waller-Bridge co-writing Bond 25:
She's a strong woman with a great comedic touch so I think she's really going to amp up the female perspective, and the Bond of old - I think his days are numbered.

Allies MI6 profiles Eve, played by Naomie Harris, the field agent who aids 007 on missions to Turkey and Macau