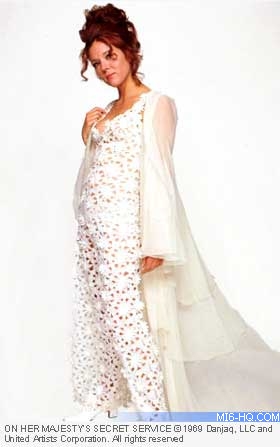 PLEASED TO MEET YOU
The Countess runs into 007 at a deserted beach on the coast of Portugal. While Tracy is intent on ending her life, Bond has other plans for the striking damsel in distress.

"Thy dawn, O Master of the World, thy dawn. For thee the sunlight creeps across the law."

CAUGHT IN THE ACT
After perusing the bloody-minded Tracy to a Lisbon Casino where she bets away money she does not possess, 007 gets her out of another foolish folly before retiring to his apartment and earning his reward. Tracy informs Bond that she always repays her debts. In the morning however, she is gone and Bond must chase after her once more. 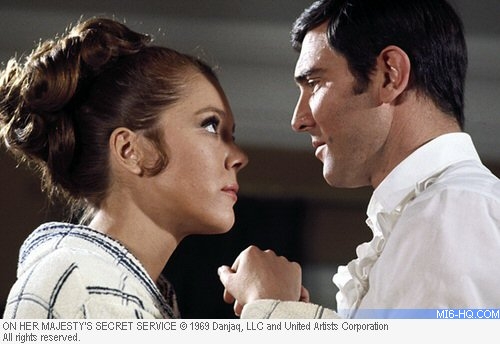 PROFILE
While her lifestyle of drink, gambling and wayward men have lead her to a phase of depression, beyond this, Tracy is a caring and gentle woman but with a fiery quick wit, who gives James Bond something beyond the usual one-night-stand. She is the daughter of mafia mobster Marc Ange Draco, head of the Union Corse, but due to a falling out only visits her Papa annually on his birthday. Tracy provides 007 with the next connection in his search for the arch villain Blofeld - but despite Draco's upfront proposal to marry off his daughter to Bond, Tracy has other ideas. She is strong-willed but caring lady who takes on any challenge that is thrown at her. She harbours a talent for driving and skiing and ably assists in Bond's escape from Blofeld in Switzerland.

Tracy wins Bond's heart and he asks her to marry him. Sadly, the new Mrs. Bond is gunned down by Irma Bundt, Blofeld's sinister henchwoman, just minutes after the wedding. 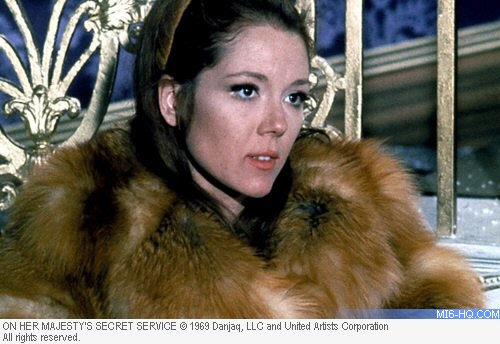 BIOGRAPHY
Enid Diana Elizabeth Rigg was born in South Yorkshire, Doncaster. Daughter of a railway engineer, the Rigg family spent the majority of her first six years living in Bikaner, India (where her father worked) before returning to live and study in Fulneck, UK.

She attended a local private school where she was encouraged to indulge in drama and music. Although it has been reported Rigg despised much of her schooling, drama classes provided a haven for these years. She was also influenced by her grandfather who would read her poetry from Shakespeare and TS Elliot on her regular visits to see him.

"Classes were incredibly boring. I took to dreaming. They took to punishing me. I was always working off punishments for not doing what I was supposed to do," Rigg retold her memories of this period in a 1973 interview.

In 1955 she auditioned and was accepted into the UK's prominent drama school - the Royal Academy of Dramatic Arts. At RADA, Rigg continued to feel limited and restless within her environment and was very nearly expelled on one occasion. Rigg later commented that her experiences at RADA were ultimately positive as it gave her a taste of the real world and helped her settle into her career as a promising actress.

She won her first professional stage role in 1957: Rigg played Natella Abashwili in "The Caucasian Circle". After the success of this production, Rigg worked for a time in the backstage world, becoming an assistant stage manager and gained an insight in the hard work, beyond the conceived glamour that went into any production.

She left RADA in 1959 and persuade her on-stage career, signing a prestigious contract with the Royal Shakespeare Company. Roles with this top-class dramatic company included Cordelia in "King Lear" and Helena in "A Midsummer Night's Dream".

In an astoundingly bold move, Rigg auditioned for the now-famous role of Emma Peel - Steed's soon-to-be associate in the popular TV adventure"The Avengers". Despite never having seen the show, Rigg read for the role and won it.

As Emma Peel, Rigg was flung into stardom throughout the UK but generally did not like the fame or shooting experience. As a relatively new actress at ABC, Rigg was paid less than much of the crew and had to work on set for extended hours. However, "The Avengers" would remain an iconic debut for Rigg and spring-boarded her career to bigger work in television and movie making.

She won two Emmy award nominations for her time as Emma Peel but although he résumé was picking impressive pace, Rigg was not happy with stardom. After just two seasons of "The Avengers", Rigg returned to the stage, playing in the Noel Coward penned "The Marquise" and Tom Stoppard's "Night and Day".

She made her cinema debut in James Bond's new outing "On Her Majesty's Secret Service". She vowed this sort of role would be a rare occurrence, as she despised being depicted with guns or as an action figure - a hangover from her days as Miss Peel. While terrible rumours flew around the set about her relationship with one-time 007 actor, George Lazenby, Rigg denies there was a relationship beyond a professional one.

In 1973 she piloted a TV programme, "Dianna", which saw the accomplished actress as an English fashion designer working in New York City - sometimes seen as a British answer to the Mary Tyler Moore Show. 13 episodes were aired but the popularity was not gained to warrant a second season.

In her personal life, Rigg has been married twice - first in 1973 to an Italian painter, whom she reportedly weathered a stormy relationship before their divorce in 1976. In the 1980's Rigg was married for a short time to Archibald Stirling, with whom she had one daughter, Rachel. The second marriage broke up less than 10 years later. Rachel has gone on to become a promising actress in her own right and in 2006, was linked to the would-be role of Vesper Lynd.

In the 1980's, Rigg played opposite British screen legend of the same era, Anthony Hopkins, in "Little Eyeoff" and made a short stint as the host of PBS "Mystery", filling the shoes of the retiring, legendary host, Vincent Price.

During the 1990's, Rigg performed predominantly on stage in a variety of impressive productions including: "All For Love" and "Who's Afraid of Virginia Woolf?".