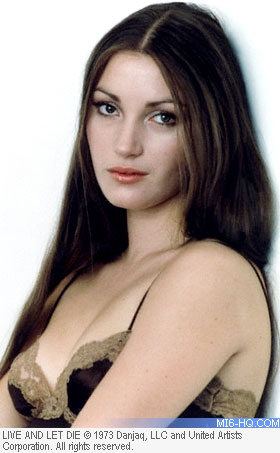 PLEASED TO MEET YOU
Solitaire predicts 007's arrival even before he disembarks the plane at JFK airport - she foretells Bond's appearance perfectly, noting accurately that he will bring violence and death. When their pair come face to face in Mr. Big's Fillet o' Soul hide-out, Bond toys with her affections and loyalties to the hoodlum. Solitaire is wary but excited by the prospect of 007's bold and cavalier attitude.

"Is there time before we leave for lesson number three?"

CAUGHT IN THE ACT
As the tarot cards predicted, it was only a matter of time before Solitaire's affections were swayed. Bond teaches the young and innocent Solitaire three lessons to survive in the world of the drug-peddling, voodoo taunting goons. Once warmed to the dashing secret agent, Solitaire becomes far more personable. 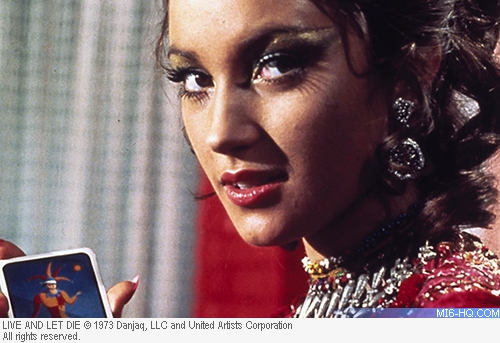 PROFILE
A third generation psychic and tarot reader, Solitaire is a slave at the bidding wish of Dr. Kananga - a brutal diplomat, out to make a fortune on the American underground. Kananga believes in Solitaire's power of the tarot and lords this over her. While a charming and kindly young lady in her own right, she is suppressed and kept prisoner by her employer. Once rescued by 007 thanks to a slightly stacked deck of cards, she becomes a bolder spirit and although no longer with the power of the psychic, she is a beautiful and daring companion for James Bond. 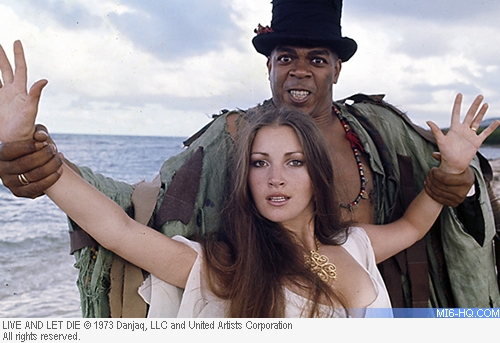 BIOGRAPHY
Born as Joyce Penelope Wilhelmina Frankenberg in February of 1951, Seymour was the daughter of an English gynaecologist and a Dutch nurse. Her love of theatre and the arts grew from an early age, appearing on stage at age 13 as a member of the London Festival Ballet. With a dream to dance in the Kirov Ballet, she studied and practiced long hours and at age 17 achieved her dream.

Seymour was trained at the Arts Educational School in Hertfordshire, UK, but at age 18 took a juxtaposed path in order to pursue acting. To get into various auditions she adopted the stage name, Jane Seymour, after Henry VIII's famed third wife. She described the choice of name, saying "it scanned nicely and rolled trippingly from the tongue."

The aspiring teen actress moved to the US to pursue her career, where although her staggering good looks found her to land a host of auditions, many felt she was too exotic and unfamiliar for the various roles.

She landed her first on-screen cameo in Richard Attenborough's "Oh What A Lovely War". She went on to lend her voice to various characters in a selection of radio plays and chalk up a variety of TV credits, including air force-drama"The Pathfinders".

Her first big-screen credit came as a relatively unknown in the multi-million dollar Bond adventure 'Live And Let Die'. Debuting along with Roger Moore (his first outing as 007) Seymour, a striking figure and enigmatic character, shone in Guy Hamilton's Bond picture.

Although Jane Seymour was now a household name, the young actress returned to the UK for a period and won roles in various theatre productions before pursuing any further big-budget Hollywood adventures. Notable credits to her name include a regular in 1971's romantic-drama "The Onedin Line" or her return to the US and the role of Serina in the original "Battlestar Galactica" (1978).

While her big-screen appearances remained sporadic, Seymour's television work remained prolific, with roles in "East of Eden", "War and Remembrance" and mini-series "Onassis" - for which she was rewarded with an Emmy. In the new millennium, Seymour has taken various guest roles in US TV including, comic "How I Met Your Mother" and legal drama "Justice". She appeared on the fifth season of the popular "Dancing With The Stars" but was eliminated in the 7th round.

Since her acting debut, Seymour has been married four times and has four children. She currently lives with husband of 15 years, James Keach, with whom she has twins Johnny and Kris.