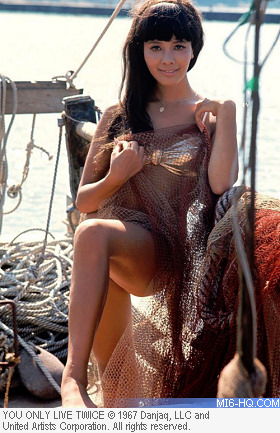 PLEASED TO MEET YOU
Aki rendezvous with Bond at a rowdy Sumo wrestling match. While 007 expects the MI6's stuffy agent in Japan, Henderson, he receives more than he bargained for when he comes face to face with the gorgeous, sharp and resourceful Japanese secret agent.

"I think I will enjoy very much serving under you."

CAUGHT IN THE ACT
After saving Bond's skin and racing him to safety a number of times, Aki lures him to the headquarters of the Japanese Secret Service - for whom she works. The agents meet again, socially this time, in Tiger Tanaka's luxury spa and estate. 007 enjoys the down-time on this mission, especially the attention from Aki and Japanese customs. 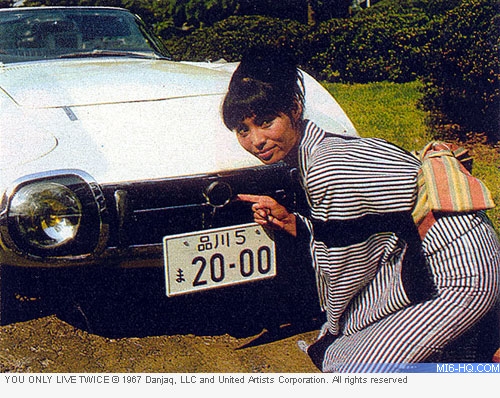 PROFILE
Bright and resourceful and with a flair for fast driving, Aki is Tiger Tanaka's top agent in the Japanese secret service. She becomes 007's guardian angel on many occasions and continually rescues the British agent from sticky situations. Her pride and joy is the company car, a very swift and graceful Toyota 2000GT with a range of useful accessories. Aki is clever and doesn't give in easily to Bond's ever-charming patter and really takes him for a ride. Aki oversees 007's transformation to his humble Japanese fisherman's guise for his "wedding" to Kissy Suzuki. The agent ultimately meets a poisonous fate where a SPECTRE assassin fails to kill 007. 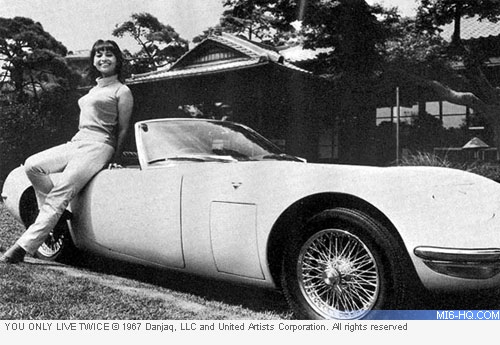 BIOGRAPHY
Born on the 26th of August 1941, Akiko Wakabayashi began her film career in 1958 with "Hanayome Sanjuso" ("Song of the Bride") and quickly rose to stardom in Japan. Wakabayashi made her break in the film industry during the Golden Age of Japanese cinema - along with the likes of Kumi Mizuno and Mie Hama whose stunning looks brought them success in the film business.

In 1962, Wakabayashi played Tamiye in the sci-fi Tokyo thriller "Kingu Kongu tai Gojira" which made a small screen release in the USA a year later. The same year she starred in an Italian comedy directed by Luigi Filippo D'Amico which was named after her: "Akiko".

In 1966, Akiko would team up with her Bond co-star-to-be Mie Hama to star in the Woody Allen's debut slapstick comedy "What's Up Tiger Lily?". A year later, the Japanese star picked up the role in 007's fifth outing, 'You Only Live Twice'.

Wakabayashi was originally set to play the role of Kissy, the Ian Fleming penned character, but when her co-star Mie Hama struggled to take on a larger role (due to the language barrier) Akiko stepped in and the writers crafted a new character for her while Hama took on the smaller role of Kissy. She caught up in the hysteria in her native Japan that dogged the filming of the movie. After the opening of "You Only Live Twice", Wakabayashi dropped off the acting map with just a one more film and a handful of television appearances.