Assassin Francisco Scaramanga, known as "The Man With The Golden Gun", has stolen a device which will allow him to control solar power for criminal purposes. Bond is assigned to stop him, but Scaramanga's Golden Gun has 007 in its sight.

A waiter serves champagne to a couple and welcomes an old American man. The American is a hit man who is paid with an envelope full of cash. It turns out later that the servant hires people occasionally to keep his master sharp. The man is taken to a house full of wax works where he and the servant's master will duel. The servant goes to a control room to monitor the house whilst the two assassins do their business. The hired killer loses, and we see the servant's master shooting the fingers off a James Bond waxwork..

The title is used as a nickname for the villain Francisco Scaramanga, but it was originally the title of Ian Fleming's final James Bond novel.

Bond: "Who would spend $1 million to kill me?"
M: "Jealous husbands. Outraged chefs. Humiliated tailors. The list is endless!"

At the start, a rival assassin attaches a silencer to his gun, yet when he fires it the gun sounds normal.

First appearance by Roger Moore as Bond, and the first time Bond drives a bus.

The original teaser trailer features a short scene not used in the final film: While Bond is chasing Scaramanga on his island, he throws a Molotov cocktail and shoot it to explode into a ball of flames. The airing of this film on "The Bond Picture Show" on ABC have edited Chu Me's rear nudity when James Bond meets her in Scaramanga's swimming pool. More waves were added to the water to obscure it. 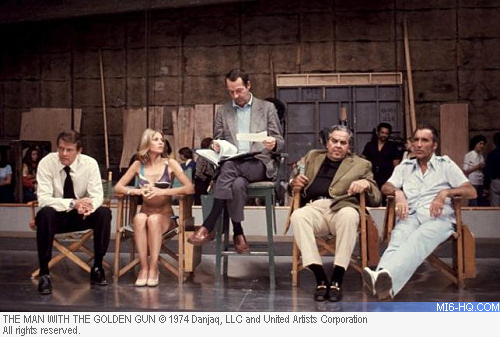 The first American TV broadcast on ABC in the 1970s featured alterations to the opening credits to obscure partial nudity.

On the MGM DVD release, the complete ending to John Barry's score is heard when Bond kills Scaramanga in the fun house. On previous releases, the score is stopped abruptly when Bond fires, diminishing the effect.