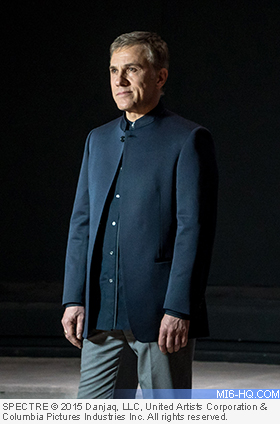 Profile
Believed to be dead, Franz Oberhauser has kept a low profile for over 20 years building an intricate network of spies and terrorists who, in turn, infiltrated other terror organisations. Not afraid to take the most drastic actions to further his goal, Oberhauser killed his father as part of a plot to fake his death. He now prefers to go by the name Ernst Stavro Blofeld which he has appropriated from his mother's side of the family. Franz is sly and spiteful and conducts all of his business with an arrogant self-assuredness.

"It's always been me. The author of all your pain."

Scheme
Blofeld has been running a network of terror rings and using their manpower for his own gain. Secretly behind some of the largest plots in Bond's recent years, SPECTRE has positioned itself as a puppet-master of terror. Blofeld now wants to use the recent spate of successful attacks on high profile targets to fool governments across the globe into rushing into operation new surveillance methods and protocols. With a stooge at the head of the British intelligence force and the Nine Eyes programme, SPECTRE will have a new level of surveillance and power. 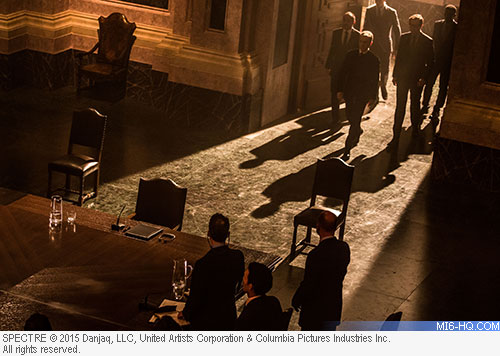 "Welcome, James. It's been a long time."

I've Been Expecting You
Bond infiltrates one of SPECTRE's infrequent midnight meetings whereat Blofeld will select a new henchman charged with assassinating the 'Pale King'. However, Blofeld is not fooled and quickly spots 007 in the rafters. In this brief encounter the villain hints at a significant history between 007 and the SPECTRE chief before SPECTRE goons eject Bond violently from the building and Hinx takes chase.

Headquarters
Blofeld has made home in an isolated crater, created by the Kartenhoff meteorite. Somewhere in the south of Morocco where few cars and only occasional trains travel, SPECTRE runs a high-tech observation centre, tapping the power of the world's nations and their security architectures. The base includes a solitary chamber, starkly dressed, where the impactful Kartenhoff now resides. It also includes living quarters, modern and minimal but comfortable. 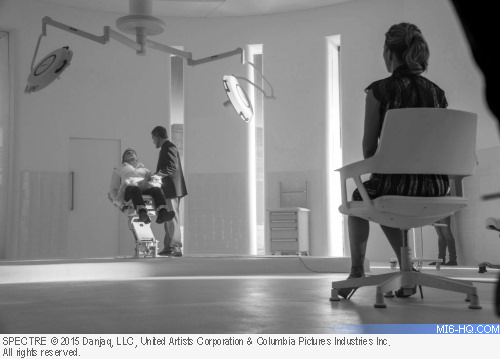 Gadgets & Vehicles
Blofeld's revenge against his boyhood nemesis, James Bond – who, as an adopted child, won the affections of Oberhauser's father – is to strap 007 to a mechanical chair and use precision surgical drills to torture the secret agent. The machine targets Bond's grey matter so as to render him memoryless and exert as much pain as possible in the process. Blofeld also has a private helicopter to transport him around London at a moment's notice.

Dress Code
The villain has a penchant for nehru shirts, short trousers and sockless boater shoes. He dresses in plain grey or grey blue outfits and worries little about his physical appearance. 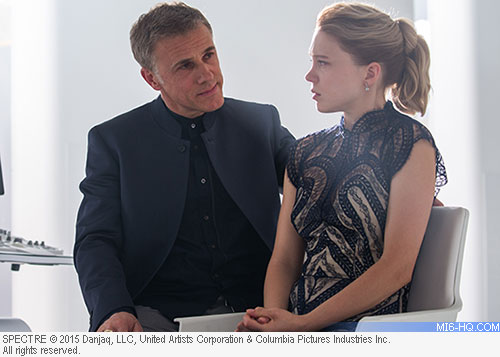 Goodbye, Mr Bond
Blofeld leaves Bond for dead in the ruins of the old MI6 headquarters, but Bond escapes before the building's imminent destruction and pursues Blofeld's helicopter through the centre of London by boat. Blofeld is initially oblivious to a light pinging as Bond's Walther rounds pluck gently at the exterior of the helicopter. Then 007's shot finds its mark and the helicopter careers wildly out of control. The pilot makes a crash landing on Westminster Bridge and Blofeld is quickly surrounded by police, M, Tanner, Moneypenny and Bond. Confronting his childhood rival, Bond stands over a man resigned to his death. Instead of killing in cold blood, Bond ditches his gun in the river and leaves Blofeld to the authorities.