The Premiere of the Americas will follow the World Premiere in London and marks the first time that Mexico has hosted an international James Bond premiere.  The date coincides with the colourful Day of the Dead festivities across Mexico in celebration of the film's spectacular opening sequence set in Mexico City. 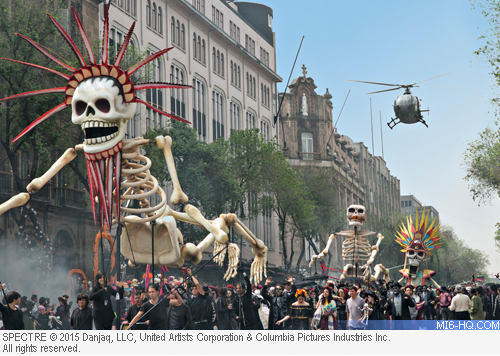 Michael G. Wilson and Barbara Broccoli commented, "We owe our magnificent Day of the Dead opening sequence, shot in Mexico City, to the expert craftsmanship of our wonderful British and Mexican crews. With 2015 being the Year of Mexico in the UK and the Year of the UK in Mexico, it is fitting that the Premiere of the Americas will take place in Mexico City."

Following the World Premiere in London and UK release on October 26th, SPECTRE will begin its rollout in North America and South America on November 6th.

Skyfall, the 23rd James Bond film, was a worldwide box office phenomenon, opening #1 in 70 territories around the world and earning over $1.1 billion worldwide.