Daniel Craig touched down at 2pm in the small village of Altaussee, on the shore of Lake Altaussee, in central Austria today ahead of 'SPECTRE' location filming tomorrow (Monday 5th January 2015) and the day after (Tuesday 6th).

Craig was joined by a 300-strong crew, who have fully booked 'Seevilla', the local hotel. About 10 other local accommodations were fully booked to also house crew members. It is understood that Chrisoph Waltz will be on location in his native Austria, but purely as an observer as he has no scenes to shoot until February.


Daniel Craig and crew arrive in Altaussee by a camouflaged German helicopter.

The Jagdhaus Seewiese, an iconic log cabin, was of particular interest to the location scouts when they first expressed an interest in the location back in October. The scene set at Altaussee and to feature the Jagdhaus is expected to involve 007 crossing the lake by boat. Instead of actually rowing the boat, it will be dragged by an underwater rope.

The local fire department has been in full swing, not for the risk of any fire, but to help lower boats in to the lake and move equipment around the snowy roads. The local fire chief Christian Fischer was asked by local press about the filming, but gave nothing away stating that he had signed a confidentiality agreement. Local reports claim that the fine for breaking the confidentiality contract is 50,000 Euros.

The Austrian film organisation, who funded the campaign to get 007 to their country, were especially happy with the resulting business as the 'SPECTRE' production have booked a total of 30,000 hotel nights across Tyrol, Carinthia and Styria, according to Economy Minister Reinhold Mitterlehner. At least 6 million Euros are being spent on transport, buildings rent and local salaries.

A flight ban has been ordered by the local authorities, in effect between the 4th and the 6th of January, with the mayor explaining this was not because of any aerial action but so that paragliders who frequent a nearby club will not spoil any of the crew's shots. Aerial shots for 'SPECTRE' were under way under the stewardship of second unit director Alexander Witt back in December. A helicopter with cameras mounted for more aerial shots began practice runs today.

"About half of the approximately eight-kilometer lake perimeter is closed for the shooting," said Ernst Kammerer, head of the Tourism Association Ausseerland.

After filming in Altaussee wraps, the cast and crew move on to Solden on Wednesday (7th January) and Obertilliach next Monday (12th January). 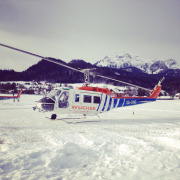 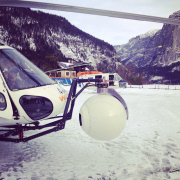 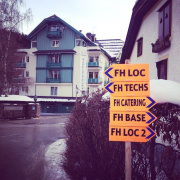