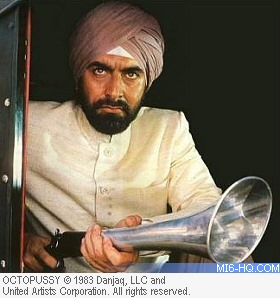 Profile
A tall but silent Sikh, this strong man is the willing servant of the exiled Prince Kamal Kahn. As equally at home in a tuxedo as a safari suit, Gobinda is Kahn's only truly trustworthy ally.

He performs various duties at the Monsoon palace, as well as dealing with some of his master's messy problems, always efficiently and under the radar. Gobinda is also responsible for the setting and the guarding of the nuclear bomb his boss and General Orlov plan to set off in a West Berlin airbase.

Involvement
Bond first spies the tall, imposing man when Gobinda is acting as chauffeur for Kahn and Magda in Bond Street after the Sotheby's auction. Later in India, it is clear Gobinda means business when he destroys the rigged dice at the hotel casino and peruses 007 and his Indian ally, Vijay, through the Udaipur markets. Ultimately the goon captures Bond, after Magda seduces the spy, and he is swiftly transported to stay as Kahn's 'guest' at the Monsoon Palace.

After Bond escapes his blunderbuss during an impromptu hunt through the jungle, Gobinda finally faces off against Bond when Kahn sends him out onto the roof of their twin-prop plane in order to dispatch with 007 once and for all. Despite having a machete at his disposal, Bond gets the upper hand and the loyal henchman falls twenty-thousand feet to his death. 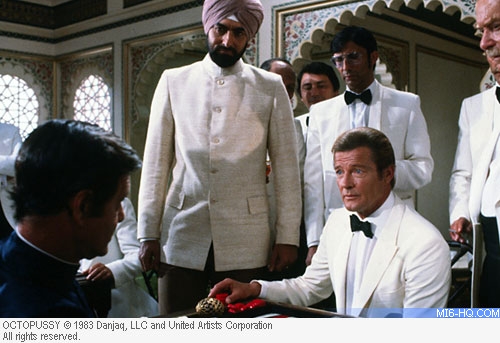 Biography
Born in the northwestern state of Punjab, India, in 1946, Kabir Bedi grew up in Nainital where he attended the old Sherwood College. The school retains a national reputation and encourages art, theatre and debating as well as sports and sciences.

His on-screen career began in the early 1970s when he got involved in both Hindi films and more mainstream 'Bollywood' productions. His first role was as Mahesh Jetley in the 1971 production, "Hulchul", alongside veteran Indian actors Prem Chopra and Amrish Puri (memorable for his role in "Indiana Jones"). He quickly earned his way into starring roles in a score of Indian films, notably, "Vishwasghaat" (1977) and B-grade "Satan's Mistress" (which starred Bond girl Britt Ekland) before making his Hollywood debut in "Octopussy" (1983). 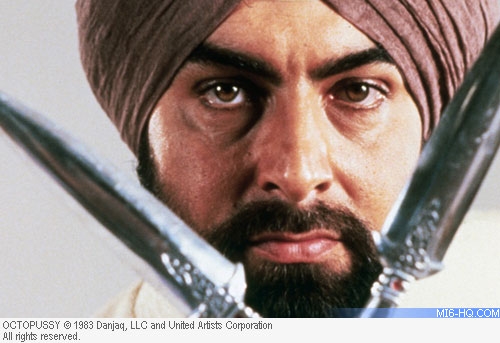 Since his run-in with James Bond, Bedi has had a busy career in both Indian and American television and film. He had a recurring role in the Golden Globe winning drama "Dynasty" and the soap "The Bold and the Beautiful" as well as a bit-part in "Magnum, P.I."

More recently he shot his 26th episode of Italian comedy "Un medico in famiglia" which has been running since 1998. Kabir is fluent in Italian, Hindi and English, and in 2006 appeared on the West End in a run of "The Far Pavilions".

Two of his three children are Indian celebrities in their own right. His son Adam is an actor and son Pooja is a talk-show host. He is currently an ambassador for the Burma Campaign UK.