Just a night after the Royal World Premiere in London, Daniel Craig and his co-stars were touching down on the first stop of their worldwide promotional tour and Rome was hosting a glamorous event to celebrate the launch of 'SPECTRE' across Italy. The dress code was somewhat less formal than the night before and the cast was left incomplete with Naomie Harris and Dave Bautista heading instead for Zurich.

After the crowd had taken their seats, Sam Mendes and Barbara Broccoli were welcomed to the stage. "It is a real pleasure to be here," remarked Mendes. "We made a large part of this movie in this wonderful city." It seemed only appropriate to the creative team that the second city to receive the fanfare would be Rome. The first member of the cast Mendes welcomed on to stage was a native Italian, Alessandro Cremona, who plays the assassin Marco Sciarra. He was followed by Christoph Waltz, Monica Bellucci, and Daniel Craig.

"We all had a wonderful, extraordinary time in this city. We are really proud of the movie. I think it's fair to say when you make a Bond movie is that James Bond belongs to everyone." - Sam Mendes 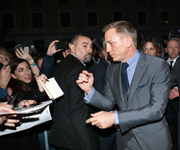